Microsoft is already working on Windows 10’s 20H1 update. Expected sometime around April 2020, this will likely be Windows 10 version 2003. It’s much bigger than the upcoming 19H2 update but still feels like a collection of useful improvements.

This post is up-to-date with features included in Windows Insider builds up to build 18970, released on August 29.

A New Cortana Experience (With Typing)

Microsoft is advertising a “new Cortana experience” with a “brand-new chat-based UI.” You can now type queries to Cortana rather than say them out loud. The history of your conversation with Cortana will appear as if it was a chat window, so you can see the results of recent queries just by opening Cortana from the taskbar.

Beyond the new design, Microsoft says it has “updated Cortana with new speech and language models” as well as “significantly improved performance” of the voice assistant. It supports both Windows 10’s light and dark themes, too. 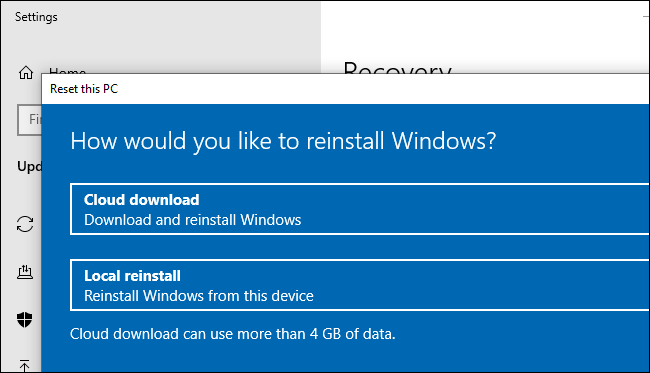 Windows 10 has a new “Cloud Download” option you can use when resetting your PC to a default Windows system. When you head to Settings > Update & Security > Recovery and choose to reset your PC and remove everything, you can now tell Windows to use “Cloud Download.” Rather than reinstalling Windows 10 from the files on your local system, Windows will download the most up-to-date version of Windows 10 and install it on your system.

This will save time on updates afterward. Previously, the only way to do this was to either update Windows 10 before “resetting” your system or by creating new Windows 10 installation media.